Three Common Problems And Solutions of Thickeners in Concentrators

The thickener is solid-liquid separation equipment based on gravity sedimentation and is a commonly used thickening equipment in concentrators. In practical applications, the thickener will also encounter problems, which will affect the normal operation of the concentrator. The following are the three common thickener problems, and the corresponding solutions are given.

Muddy overflowing water is one of the common failures of thickeners. The thickener cannot perform solid-liquid separation well, and the overflow is turbid. The reasons and solutions for this problem are as follows:

A. A certain amount of air is mixed in the pulp, and the intervention of air causes the pulp to produce a large number of bubbles during the mixing and stratification, which makes it muddy.

B. The ore slurry contains too much mud, which will make the overflow difficult to clarify, especially the fine sludge of 0.1-0.001μm..

C. Too much processing capacity and too small underflow control can also easily cause muddy running.

A. Eliminate the unfavorable factors of ore pulp. For the fine sludge of 0.1-0.001μm, flocculants can be added to make the fine sludge form agglomerates and accelerate the settlement..

B. The processing capacity of the thickener needs to refer to the parameters of the cyclone.

A. Adjust the speed by raising and lowering the rake in a timely manner. 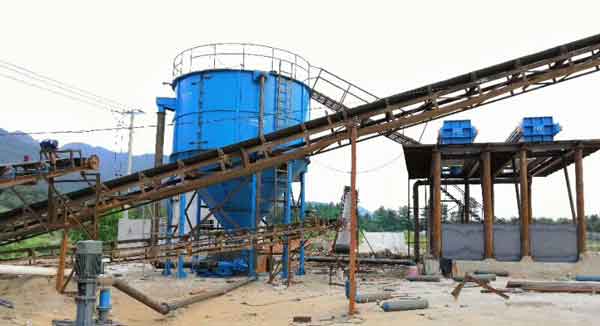 In the concentration process, uneven addition of flocculants is also a common problem, which will directly affect the sedimentation efficiency of the thickener.

1. The flocculant is added in the wrong way. When adding the flocculant, add the medicine first and then inject water. Or adding water at the same time, or even pouring the medicine into the tank at one time will make the mixing liquid uneven.

2. The dissolution time of the medicine is too long. After stirring and dissolving, if complete dissolution is not achieved after 8 hours, it will affect the normal production of the thickener.

A. Add the medicine correctly. When water is poured into the mixing tank to the position of the blades, shake the sieve and slowly sprinkle the medicine until the addition is complete.

B. Shorten the dissolution time of the medicine. The rotation speed of the stirring tank can be increased to facilitate the uniform diffusion of the medicine in the tank.

Next：How Can Screen Efficiency Be Improved?