Our Location  |  Contact Us
Location: Home » NEWS » What is sand mining ?

What is sand mining ?

Sand mining is a practice that is used to extract sand, mainly through an open pit. However, sand is also mined from beaches, inland dunes and dredged from ocean beds and river beds. It is often used in manufacturing as an abrasive, for example, and it is used to make concrete. It is also used in cold regions to put on the roads by municipal plow trucks to help icy and snowy driving conditions, usually mixed with salt or another mixture to lower the freezing temperature of the road surface (have the precipitations freeze at a lower temperature). Sand dredged from the mouths of rivers can also be used to replace eroded coastline.

Another reason for sand mining is the extraction of minerals such as rutile, ilmenite and zircon, which contain the industrially useful elements titanium and zirconium. These minerals typically occur combined with ordinary sand, which is dug up, the valuable minerals being separated in water by virtue of their different densities, and the remaining ordinary sand re-deposited.
Sand mining is a direct cause of erosion, and also impacts the local wildlife.For example, sea turtles depend on sandy beaches for their nesting, and sand mining has led to the near extinction of gharials (a species of crocodiles) inIndia. Disturbance of underwater and coastal sand causes turbidity in the water, which is harmful for such organisms as corals that need sunlight. It also destroys fisheries, causing problems for people who rely on fishing for their livelihoods.

Removal of physical coastal barriers such as dunes leads to flooding of beachside communities, and the destruction of picturesque beachescauses tourism to dissipate. Sand mining is regulated by law in many places, but is still often done illegally. 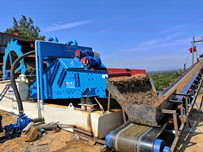