Tailings, also called mine dumps, culm dumps, slimes, tails, refuse, leach residue or slickens, are the materials left over after the process of separating the valuable fraction from the uneconomic fraction (gangue) of an ore.

Tailings are distinct from overburden, which is the waste rock or other material that overlies an ore or mineral body and is displaced during mining without being processed. The amount of tailings can be large, ranging from 90–98% for some copper ores to 20–50% of the other (less valuable) minerals.

Mine tailings are usually produced from the mill in slurry form, which is a mixture of fine mineral particles and water. (original resources from:wikipedia) 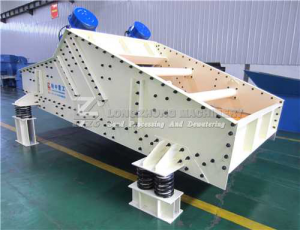 In China, there is a machine which can help people to deal with tailings. The tailings dewatering screen can be used in iron ore, copper, gold and aluminum ore tailing dehydration.