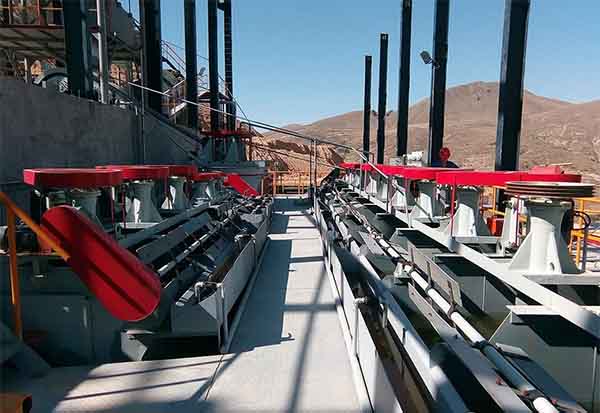 What is the difference between these two flotation processes?

1. One stage of grinding and floating process

In the actual production process, the selection of the number of stages is often determined according to the particle size of the mineral intercalation.

The crystal size of useful minerals is relatively coarse and uniform. When the ore is ground to the upper limit of the particle size that can be floated, the useful minerals can basically achieve monomer separation. At this time, a stage of grinding and flotation process (flotation after rough grinding) can be used to obtain qualified concentrates and discarded tailings.

If the useful mineral crystal size is fine and uniform, it usually needs to be ground to below -0.074mm to make the useful minerals basically achieve monomer separation. To process this type of ore, a one-stage grinding and flotation process with two grindings and one selection can be used. When the impregnation particle size is fine and not uniform, and the particle size range for monomer separation is wide, a two-stage grinding and flotation process in which the first stage of flotation ore is reground and then selected can also be used.

This kind of ore is more common, and the two-stage grinding and floating process of medium ore or tailings regrind and reselection is mostly used. First, coarse-grinding is used to separate the coarse-grained monomers, and part of the qualified concentrate is selected. Then regrind and re-select the middle or rich tailings in conjoined form.

In some polymetallic sulfide ores, several useful minerals impregnated with fine particles often exist in the form of coarse aggregates. To process this type of ore, a two-stage grinding and flotation process of the first stage of flotation concentrate regrind and reselection can be used. In the first stage, the useful mineral aggregates are separated from the gangue, and the mixed concentrate is selected, and then the mixed concentrate is re-grinded and re-selected so that various useful minerals can be separated from each other.

Next：Treatment Method of Side Plate Cracking of Vibrating Screen